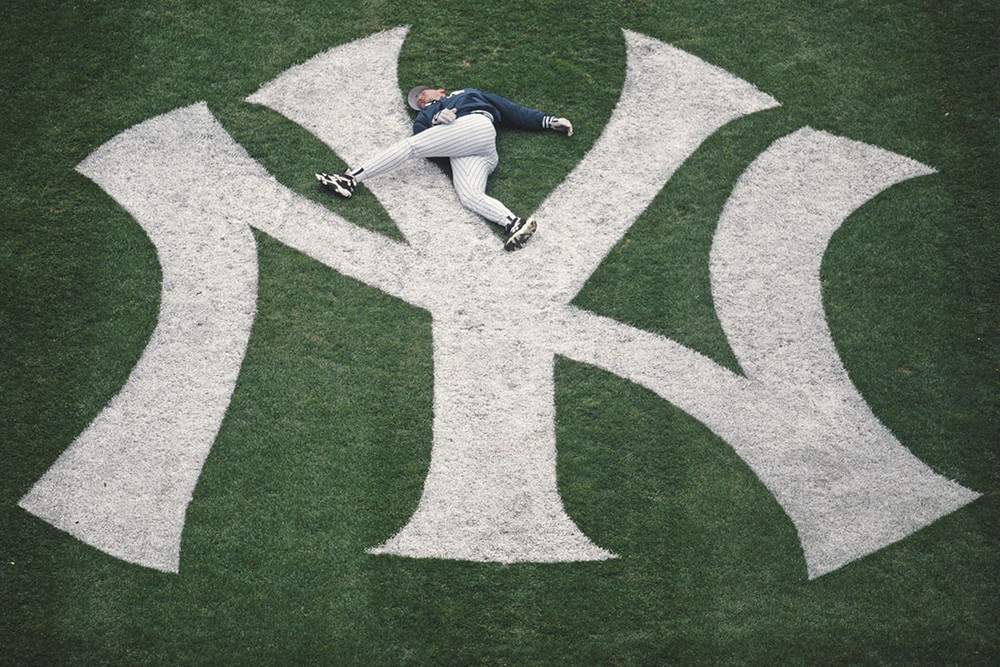 Posted 4 years ago 3 Minute(s) to read

From humbling beginnings in the Bronx the Yankees logo is now being used seen on a Gucci runway in Milan, here’s how the iconic ‘NY’ insignia transcended sport and became recognizable the world over.

The Yankee logo we know and love has a strange backstory, rooted in New York’s other symbolic squad: the NYPD. “[It] goes back to the birth of the franchise in 1903,” Yankee historian and writer Marty Appel tell Highsnobiety. “One of the team’s co-owners was former New York City Police Chief Big Bill Devery, and [in 1877] he had commissioned Louis Tiffany – yes, of that Tiffany – to design a police medal to honour a fallen officer.”

While it was originally developed to pay homage to John McDowell, New York City’s first officer shot and killed in the line of duty, Devery soon realized that the ‘NY’ insignia represented a shared spirit of unity between the police force and New York’s favourite sports team. A design that once appeared on a modest medal, was now on the breast pockets of Bill Devery’s team – a new symbol of togetherness and sportsmanship.

And how it became a fashion statement

New York has always had a global draw, you see it in the movies and on the TV and you want to be there, live there, be part of it, but most of us can’t or don’t, so the next best thing was apparel from New York, and you couldn't get more New York than a Yankees cap.

Before becoming the rich and famous’ wardrobe staple

Empire State of Mind…along came to the early noughties and the Yankees cap was everywhere – Jay-Z, Manhattan-born Macaulay Culkin had been wearing his since the home Alonedays. Then, back when puffers had their first fashion moment and slack jeans were all the rage, Brit-born soccer player David Beckham was spotted wearing his too. But maybe it was President Bill and First Lady Hillary Clinton who bucked the trend, donning theirs when the Yankees visited the White House back in 1999. 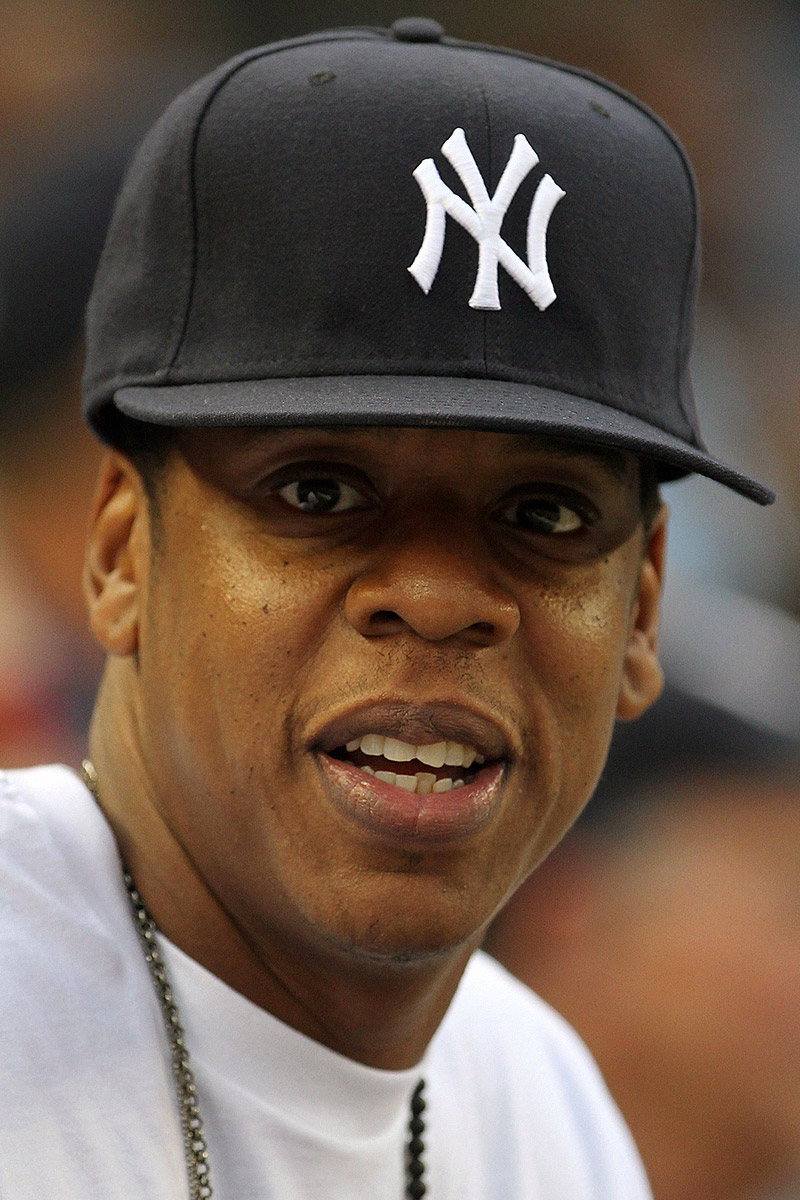 And becoming the golden logo for streetwear obsessives

New York is the inimitable home of streetwear, so it’s no surprise that the Yankees insignia has made more than a few cameos on pieces created by the industry’s foremost brands too. Co-labs with Supreme, PublicSchool and Kith as well as Louis Vuitton to name a few. 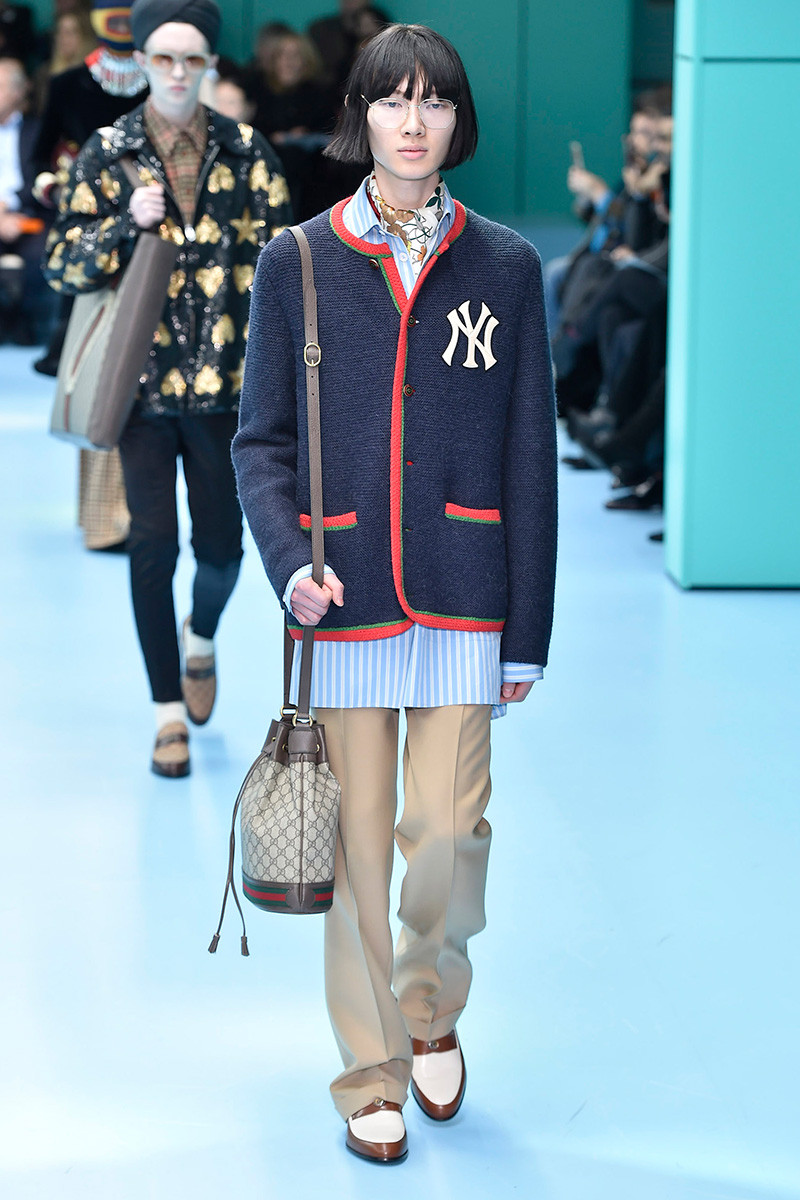 High fashion designers these days are fascinated with irony and ubiquity. Vetements’ Demna Gvasalia tapping into DHL’s iconic logo and transforming it into a statement tee with a $500 price tag was considered one of the most subversive examples of fashion anarchy the industry has seen in years. It makes sense that his equally on-trend counterpart, Gucci’s Alessandro Michele, would try it out too.

Michele first officially linked up with Major League Baseball back for Pre-Fall 2018: that Giallo-inspired collection transformed the humble baseball cap into a luxury accessory, with staple Gucci florals and colored stripes wrapped around the logos of MLB teams. Still, it was Michele’s ability to completely re-contextualize the insignia barely a season later that left us all astounded.

For Gucci’s FW18 collection, Michele unveiled a seriously luxurious take on the Yankees logo. It included silk floral suits emblazoned with a Yankees chest patch, gigantic knitted beanies and intricate, feminine overcoats that pay homage to the original insignia from 1903, when the ‘N’ and ‘Y’ sat on either side of the player’s jersey.

The historical logo that once adorned a humble $15 cap is now appearing on the breast panel of thousand dollar suits; the switch-up is monumental. If anything, Michele’s seal of approval could cause the Yankee cap to have its own fashion renaissance, stepping out of everyman shadows to become a truly coveted piece once again. 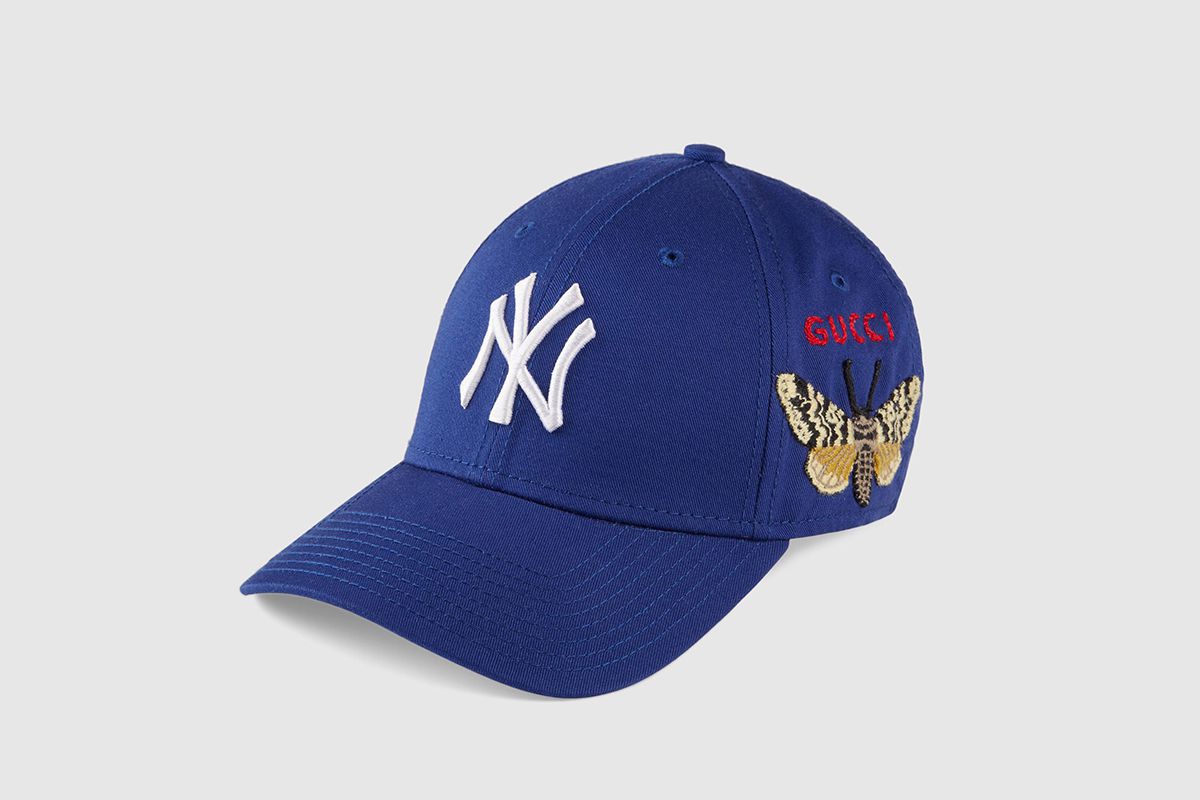 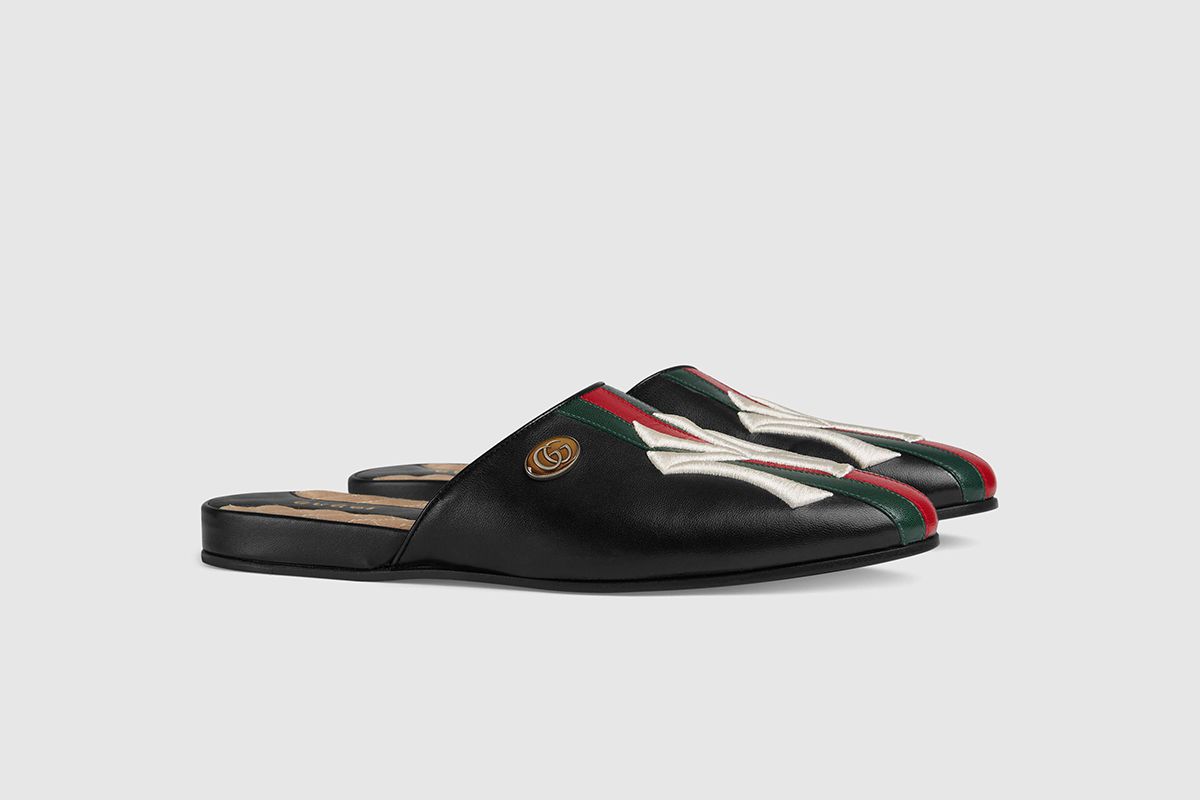 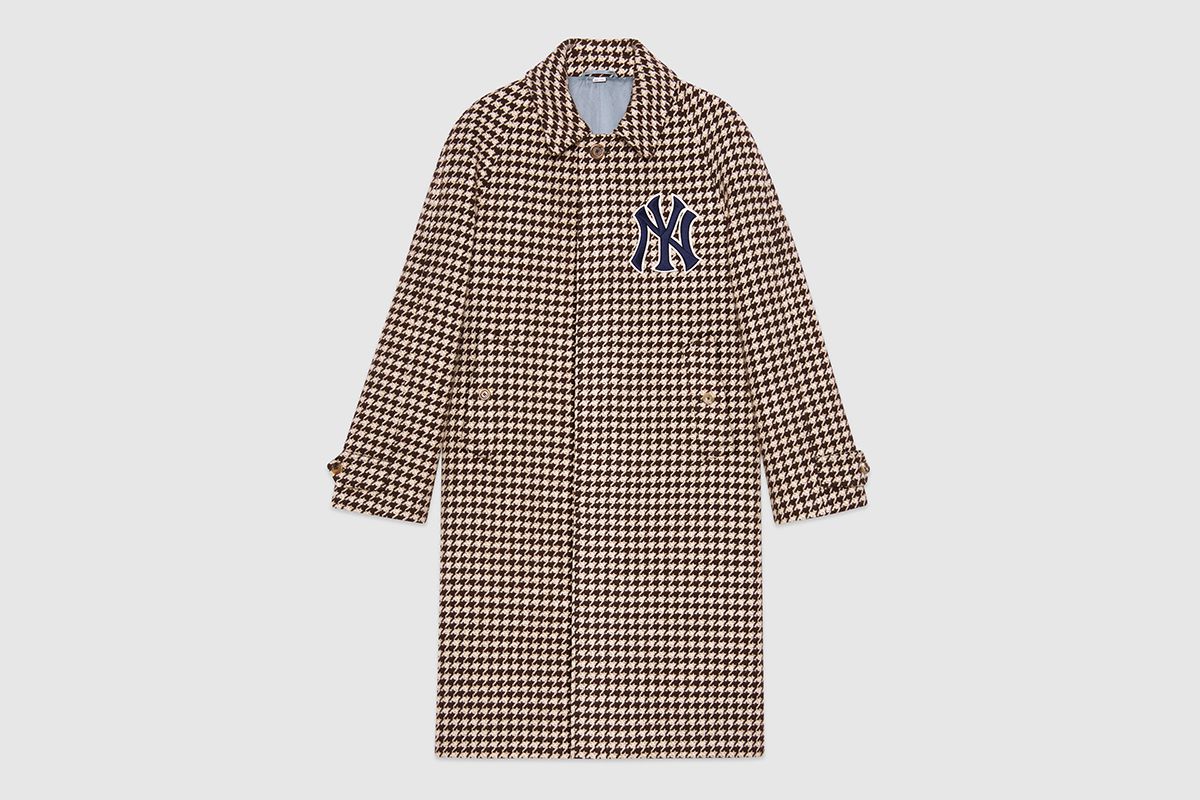